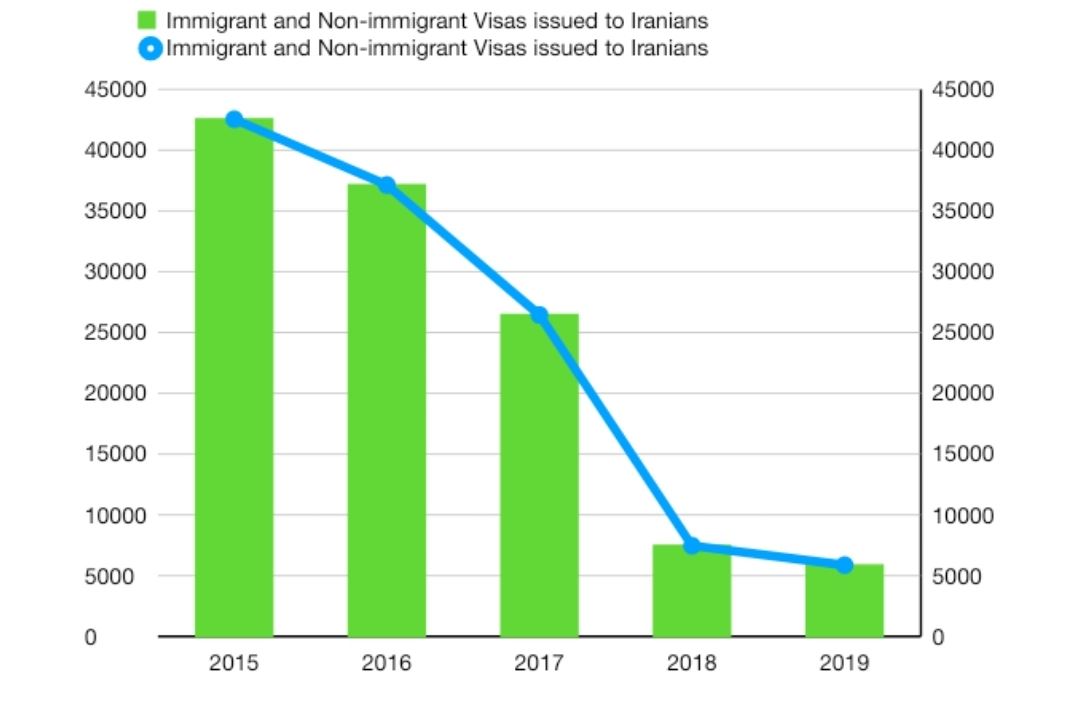 Specifically, the number of Immigrant Visas issued to Iranians dropped from 7179 in 2015, to 1623 in 2019. One major reason for this drastic fall was the Protecting the Nation from Foreign Terrorist Entry into the United States, also known as the Muslim Ban 2.0. The executive order banned all nationals of Iran except on student or exchange visitor visas.

Immigration as a whole took a massive hit under the Trump administration, especially during the COVID-19 pandemic. From 2015 to 2019, excluding the pandemic, the total number of visas issued dropped by 18.8% from 11,423,208

Accounting for all the additional COVID-19 restrictions, the Trump administration led to a whopping 61.3426% decrease in the number of Non-Immigrant visas issued. This can be attributed to the various limits the administration put on legal immigration. Specifically, his attacks on H-1B visas severely impacted the flow of work-based immigration into the United States.

The Trump administration set up three main restrictions to the H-1B visa system. A significant rise in minimum wage requirements, A limited eligibility for prospective H-1B employers and employees, and an end to the H-1B visa lottery, which got replaced with a ranking system based on salary-level.

The administration also cut its refugee limits to a record low. In 2019, the Trump administration announced that it would only admit 5,000 religious refugees, a maximum cap of 4,000 Iraqis who have assisted the U.S. military, and a maximum of 1,500 people from Guatemala, Honduras, and El Salvador. Excluding those who had already been screened and approved for resettlement, that totals to 10500 refugees, which is a massive reduction from the Obama administration's number of admitted refugees.

After the COVID-19 pandemic, the Trump administration put the immigration system in a total freeze and technically ended the admission of new refugees at the U.S.-Mexico border. This further continued the administration's plans to dismantle the asylum system at the southern border, which included controversial policies such as the infamous family separation policy, as well as the remain in Mexico policy. Both of which have been removed by the Biden administration.

The Biden administration has so far, in the fiscal year 2021, increased the refugee cap to 62,500. President Biden has also removed executive order 13780 and introduced an immigration bill to help rebuild the immigration system after the carnage of the Trump administration.

All data was gathered from The U.S. Department of State website, www.state.gov